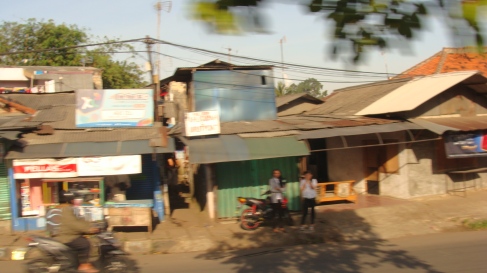 I caught a flight from Seoul, South Korea and landed in Jakarta.  The sun had set.  I stepped out of the baggage area and into sweltering humidity.  The volume of new sounds quickly caught my attention.  New languages, the sound of excitement as people greeted each other with hugs and the undeniable sound of motorbikes and buses had me looking in all directions.

I have been to some very warm places on this planet.  Iraq, Afghanistan, and Kuwait tend to stick out the most.  Iraq was undoubtably the highest temperature I had encountered at 138 degrees though it was quite dry. Kuwait was both hot and humid.  Well, Indonesia was in the 80-90 degree Fahrenheit range however the intensity of the humidity was unbelievable.

I boarded the bus and was soon whisked away from the airport.  The driver darted in and out of traffic, honking at the motorized two wheelers that dared taking the narrow bit of road between the bus and shops only to jut out in front of the bus, narrowly escaping a massive wreck, though I suspect this was not their first flirtation with near death.

Everywhere I looked, were motor bikes.  Some had helmeted riders, others did not.  Some had whole families, babies, infants, children, mom and dad.  It was most impressive.

As I arrived to where I was staying, I found myself in a portion of tamed jungle.  The frogs and geckos sang as the bats swooped down to the mosquitos that were welcoming me.  I sat and listened, assimilating to my new location, and realized that I liked it already.

(In Indonesia, the R’s are rolled as in RRRRRuffles have RRRRidges).